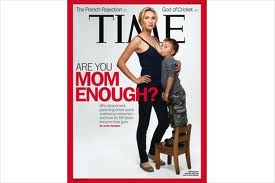 “In a way, the arguments for and against attachment parenting

mirror questions about family and work that still divide America

five decades after the advent of modern feminism.”

You don’t have kids, do you?

If you did you would know that there is no “battle that rages within the parenting community.”  The only place such a battle exists is in the media, who use it to sell magazines, and in the rhetoric of politicians, who use it to score political points.  Those of us with children are not battling one another.  We are doing the best they can with what we have within a society that would rather talk about us than offer meaningful support.  We are raising children in a world that is changing beneath our feet.  Old supports and certainties have fallen away and attachment parenting is actually a creative response to that.

Parenting methods aren’t developed in a vacuum by “crazy” (your word) parents who just feel like changing things up.  They are in part a reaction to experience.  In the case of Bill and Martha Sears, they experienced hardship and neglect in their childhoods.  It’s natural they would want better for their own children.  Even if their childhoods had been idylls, they still might have made some changes – every generation does to some extent.  But they and the so-called “devotees” of their approach are also reacting to the larger culture.

Attachment parenting strikes me as an unconscious attempt to counter the forces of detachment, fragmentation and insecurity of modern life.  Financial insecurity creates circumstances that can be harmful to family life.  Professionals are expected to move to further their careers, so they often live far from extended family and old friends who might help with the kids.  Parents’ willingness to hustle has not resulted in upward mobility, though; middle class incomes have remained stagnant since the 1970’s.  Maybe that’s why 80% of American families need two incomes to make ends meet?  Without trusted loved ones to care for our children and the shameful absence of parental leave policies, some parents feel backed into a corner:  it’s all work or all home.  Attachment parenting feels something like a new, rewarding career to women who choose all-home.

There is social insecurity as well.  Public institutions have lost authority.  Civic institutions are weakening.  Corporations are all that’s left standing, and they are better known for loyalty to shareholders than to employees – let alone the public interest – in the global economy.  As a result, people are questioning authority and convention in many areas of American life.  In response to the environmental and health consequences of industrialized food production, there has been a surge of support for organic, locally-sourced food and breastfeeding.  In response to the unsafe rise in Cesarian sections and conveyer-belt birth experiences, women are choosing homebirth in record numbers.  When faced with poor performing, unimaginative public schools, parents are embracing homeschooling.  There is also an increasing acceptance of wellness models of health, such as homeopathy and acupuncture, as well as of Eastern philosophies and practices, such as meditation and yoga.  Attachment parenting is consistent with these other trends in its quest for what is natural and for wholeness, connection and thoughtful living.

Attachment parenting is much bigger than feminism.  It is a creative response to insecure times and a rapidly changing world.  As a feminist I would like to see fewer articles criticizing how mothers mother and more conversations about how to help mothers – with parental leave policies, job sharing and investment in quality child care, for example.   In fact, as a feminist I would like to see less criticism of the choices other women make, full stop.  This is the principal reason that I threw away every other parenting book once I laid eyes on Dr. Sears’s The Baby Book.  In my haze of postpartum anxiety and vigilance his was the first voice that validated what I felt instinctively:  that this was not a time to be endured until I could get the baby on a predictable schedule and my life could return to “normal.”  It was an invitation to live more deeply, to learn from my baby as she learned from me, to allow myself to be transformed.  The practices he suggested – breastfeeding, sleep sharing, physical closeness – are not ends in themselves, but a gateway to a deep connection with my baby.

In this way, attachment parenting is more even than a response to insecure times.  It’s an affirmation of what we want:  connection, instead of separation, and cooperation – yes, even with our children – instead of competition and dominance.  To the question you imply, “Is staying home to raise children an authentic feminist choice,” I answer, “Why wouldn’t it be?”  Birth showed me my power in a way that society never would.  Motherhood has shown me my value and given me a sense of purpose that the world of paid work never could.  I’m helping to raise the next generation to live comfortably and creatively in a world that bears little resemblance to the one I grew up in.  What could be more feminist than that?