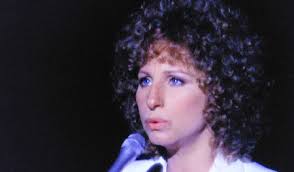 Above: The terror that just precedes greatness.

When I was six years old, my mom took my brother and me to a late show screening of A Star Is Born at the drive-in movie theater. Well, it was take us or miss it altogether, so she made a plan: put the kids in pajamas, tuck them up with pillows and blankets into the wide backseat of her Cadillac, and they’ll sleep through it.

But do you know the story? Barbra Streisand plays Esther Hoffman, a struggling singer, and Kris Kristofferson plays John Norman Howard, a rock star. He is burned out but freshly inspired by her. They fall in love. He promotes her, there’s amazing singing, and her star rises! But alas, his falls. (This was my first education in the rule of Barbra Streisand films: she gets the guy but doesn’t get to keep him).

Who could sleep through that? Not me, not even at the tender age of 6. I was mesmerized.

My favorite scene is the moment that John Norman introduces Esther, impromptu, to the world. He’s shows up late to a sold out stadium and starts to play, but his heart is not in it, and he just stops, mid-song! Now the crowd is really mad, and John Norman goes to the wings and drags a terrified Esther onto the stage. “Here’s a friend of mine,” he says, and leaves her alone, center stage.

Last weekend I was sat down with my production partner, Jon, to develop the content for a new video on postpartum. Jon is a photographer and videographer but also a dad and has great ideas. I told him the story of why I wanted to do the video, what I wanted to cover, and how I wanted it to be fun and free on YouTube, rather than for purchase on Udemy.

“Yes, you are,” he said. “You just told me a great story and you nailed the content, so let’s do it now.”

It was the last thing I wanted to do. I had wanted to script it, time it out, make it perfect – and then, only then, could I carefully dishevel it to make it “fun.”

Ugh! “Perfect”? “Careful dishevelment”? What was wrong with me? Why couldn’t I just go for it? I wanted to, but I was full of fear.

I thought of a brilliant client of mine, who has tons of experience in her field and is now expanding her practice in a complementary direction. But she is paralyzed by the idea that, in this new direction, she is not an expert. She is focused on how much she does not know, on what she does not have, and wants to have everything figured out perfectly before she begins.

“You are so much more ready than you realize,” I tell her.

Ah! My own words indict me! I am more ready than I realize.

So I do it. I begin filming the new video right then and there. Fifteen minutes start to finish. Here it is:

You can see that at the beginning I’m nervous. The pitch of my voice is all over the place. My story is not as coherent as I wanted it to be, and I repeat myself. But at about minute 5:13, I relax. You can see it. I find my groove and the rest of the video I’m just doing my thing.

And, just because I love to make grandiose comparisons, you see a similar arc in Esther’s performance. She begins unconfidently (to be fair, people are booing her). Then she’s a little mad, kind of demanding that the audience listen to her. That seems to give her confidence. And around minute 1:45 you can see, she remembers who she is: a singer, and she belts it out. By the end of the song, she’s triumphant, and the audience is on its feet cheering!

Be Bold and Mighty Forces Will Come to Your Aid.

That’s what happens when you begin before you’re ready.

Okay, sometimes you fall on your face! Or not even that. Maybe you just embarrass yourself a little. But let’s talk odds:

Chance that you’ll get a standing ovation for staying where you are and waiting for perfect?

Chance that in the course of taking a risk you will:

What do you want, friend? Goose your intention by taking a risk. Just take a step, one step, towards center stage – or allow yourself to be pushed! Begin singing, or walking and talking, or make that phone call, pitch that idea, and who knows? Maybe a star will be born.