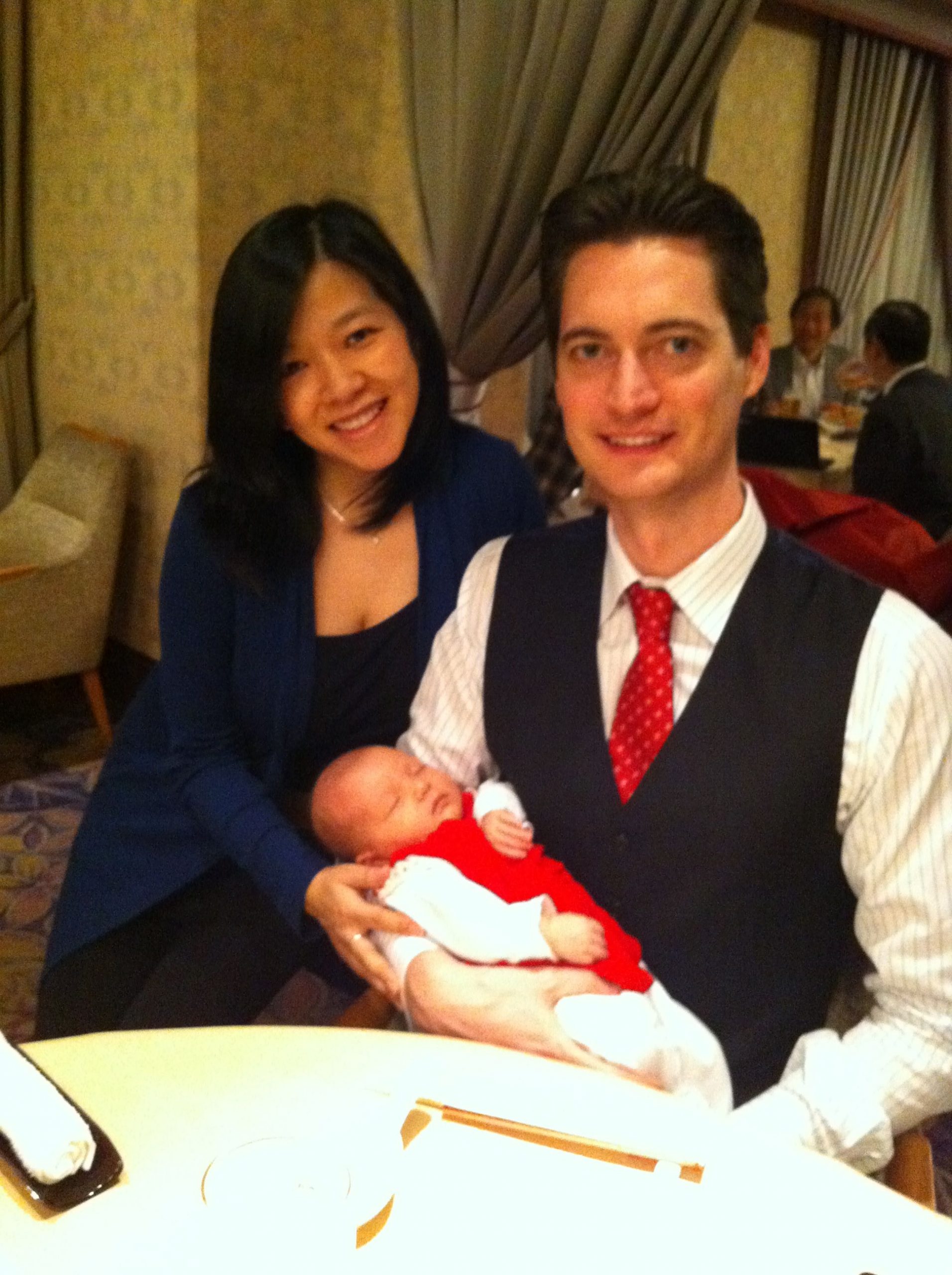 Daniella and her beaming parents

I was due to give birth on 5th February at the Japanese Red Cross Hospital in Hiroo, my obstetrician was a local Japanese doctor (Dr Kasai) who spoke very good English and was great throughout my pregnancy. I was told early on that Red Cross does not offer the epidural or gas, and the only pain relief available was pethidine.

I looked into more natural ways to relieve the pain on the day, and prepare myself mentally for the birth and eventually found hypnobirthing and pre-natal yoga. I believe they both helped me immensely in my approach and on the day of the birth. I was very positive about the birth process, which I think helped me relax towards the later stages of my pregnancy.

In the early hours of 31st Jan, I started to have period pain like cramps. I knew this doesn’t automatically mean I was going into labour and as it was very manageable, I didn’t think much of it and told my husband to head off to work as usual.

As the day progressed, the cramps came and went but still over 30mins apart and not painful enough to stop me in my tracks. I went about my day as I always did, making sure I ate well and stay hydrated.

By about 6pm, I was starting to get the feeling I might be ready but as it really still didn’t feel intense enough I really wasn’t worried, and at this point the surges (contractions) were still over 15mins apart.

My husband got home at 7pm, and I was still very relaxed but they were now around 10mins apart. He made some dinner for us, and after that they became a little more intense. I still didn’t feel the need to go to the hospital, and preferred to stay at home. I took a bath, relaxed and at every surge I used my surge breathing (as per hypnobirthing), and my husband read to me from the book to keep me relaxed which helped a lot.

We headed for the hospital around 9pm. When they checked me over, my surges were now 5mins apart, and definitely getting more intense. I was hoping for a water birth, but both rooms were already occupied so I went into a standard labour and delivery room.

From around 10pm onwards all I could concentrate on was my surge breathing, and using all the positions I got from yoga to get me through the surges. My husband was amazing and kept reminding me to breathe as we had practised, and passed me water after each surge, and kept me cool with a water spray.

As the surges got closer together, I began to use my birth breathing which made the surges much more bearable, esp. during the exhale. Don’t get me wrong, they were very intense and my goal of not making any sounds did not happen. So I decided to use the vocal toning I learnt at yoga, together with my birth breathing. This was so good, breathing out and making the deep ‘O’ sound helped me drag the exhale out longer and ride the surges better.

Around 4am, the doctors asked me if I wanted to have my waters broken for me, as I was fully dilated. I was hoping for a birth with nil intervention, but by now I thought I was ready to have the baby. 15mins later, our gorgeous baby girl Daniella was born. I did end up getting a episiotomy, but had the drug free natural birth I wanted.

As soon as she was born, they placed her immediately on my chest, which was very important to me and Red Cross supported this. She didn’t leave my chest for 2 hours, as they did what they had to without her leaving me. 15mins after being on my chest, she wriggled her way to my breast and started to suck. It was such an amazing experience, and for me the best part of the whole birth. The bonding in those 2 hours is indescribable.

I believe I had a very positive birth, and I wanted to share it with everyone. Maybe I was lucky that officially my ‘active’ labour was only 6.5hrs, but I think the techniques I gained from hypnobirthing and pre-natal yoga all played a part in my great experience.

11 weeks old now, Daniella is a very good baby, who has been eating well since birth, and growing very well.