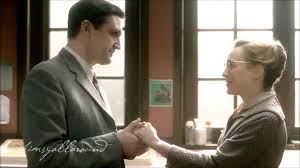 Healing the Breach Between Doctors and Independent Midwives

(Above photo is of midwife Shelagh and doctor Patrick, who fell in love on the BBC drama Call the Midwife).

Last week I reported on the UK’s decision to embrace out-of-hospital birth for women with healthy pregnancies.

So awesome, right? With this strong statement of faith in birth as normal and healthy, women around the world will be emboldened to demand more humane maternity care!

I put on the dance music and was about to pop the champagne . . . when the American College of Obstetricians and Gynecologists (ACOG) showed up with a big ol’ wet blanket and stopped the party before it even started. “We believe that hospitals and birthing centers are the safest places for birth, safer than home” (emphasis added).

Maybe not, according to a new article in ObGyn.net. In “What’s an Ethical Response to Home Birth?” obstetrician Dr. Paul Burcher, MD, PhD, makes a case that “if home birth in America is more dangerous than hospital birth, it may be because of contingent factors that can be remedied.” The solution is to drop opposition to home birth and begin to work cooperatively with independent midwives and the mothers they support.

He offers philosophical, legal and professional recommendations, each flowing from the one before.

First, philosophical:  Acknowledge that home birth is a “reasonable choice” for many women. This is a direct challenge to a cornerstone of American obstetrics: that birth is pathological and can only be safe in a clinical environment they personally direct. To give birth outside of their system, then, is reckless, and thus not a legitimate choice.

Don’t let ACOG’s anodyne statement (above) fool you. Antipathy for home birth and disrespect of independent midwives runs deep in American obstetrics. Dr. Burcher refers to the article of a colleague who referred to the surge in American home births as a “recrudescence” – a renewed outbreak of disease. That word choice does not suggest scientific objectivity or clinical detachment. It suggests that a faith is being threatened.

Dr. Burcher points to the Dutch system, where one-third of births take place at home: “An observational study from The Netherlands that evaluated more than 500,000 births in homes and in hospitals showed no increase in adverse outcomes of any kind with home birth in low-risk women.”

He seems to suggest that if physicians could put aside their bias and examine the systems in which home birth can be safe, they might be persuaded that, under certain circumstances, it could be a “reasonable choice” here, too. If you believe the choice is reasonable, you will treat those who choose it with respect. That will earn you “a seat at the table,” says Dr. Burcher.

Second, legal:  Stop making it “difficult, even illegal,” for independent midwives to practice.

According to the Midwives’ Alliance of North America, “The United States is unique in the developed world in its history of criminalizing the practice of midwifery rather than fostering collaboration between midwives and physicians, and successfully integrating midwifery into the prevailing maternity care model.”

Right now only 27 states currently offer licensing or formal recognition to Certified Professional Midwives, the biggest group of midwives trained to perform home births. In the other 23 states, they can be prosecuted, usually for practicing medicine without a license. This drives home birth underground, making it more dangerous.

“Obstetricians as a political lobby,” Dr. Burcher acknowledges, “are largely responsible for these punitive laws.” If they reversed course and instead lobbied to overturn them, the breach could begin to heal.

Opposition and mistrust have increased barriers on both sides to the safe transfer of failed home births.  Midwives and mothers do not trust that they will be treated with respect and compassion in the event of a transfer. They do not trust hospital practices. As a result they may put off the move from home to hospital too long. All hospitals know of home birth, then, are the “train wreck” cases that come in. In addition to confirming their bias, these cases can be personally traumatizing to the staff, deepening their antipathy.

Clearly, that’s a broken system. Dr. Burcher shares an example of a cooperative model working here in the US:

Duncan Nielson, the chief of Women’s Services for Legacy Hospitals in Portland, Oregon, described how by implementing a “home birth friendly” institutional culture, they saw a dramatic increase in transports to their hospital system from home birth midwives and that none of these transports were “train wrecks.” That is, by being openly supportive and collegial, they had increased the interactions between the two models of care, and midwives brought in patients who were struggling at home sooner because they did not fear verbal reprisals or nuisance reports to the midwifery board by the physicians accepting care.

It sounds so obvious, doesn’t it? But the struggle in America between midwives and obstetricians has a long history, and there is passion on both sides.

We need them to get over it, though, because we need both midwives and obstetricians! The majority of healthy pregnancies result in normal births, and midwives are skilled at providing the appropriate care for these mothers in all settings. But not all pregnancies are healthy and not all births are normal; these mothers need a greater level of medical care that obstetricians are perfectly suited to provide in a specialized location.

I am hopeful that this is the moment when the tide begins to turn, when we stop arguing over how safe out-of-hospital birth is and start working together to make it safer.

I won’t put the champagne away just yet.