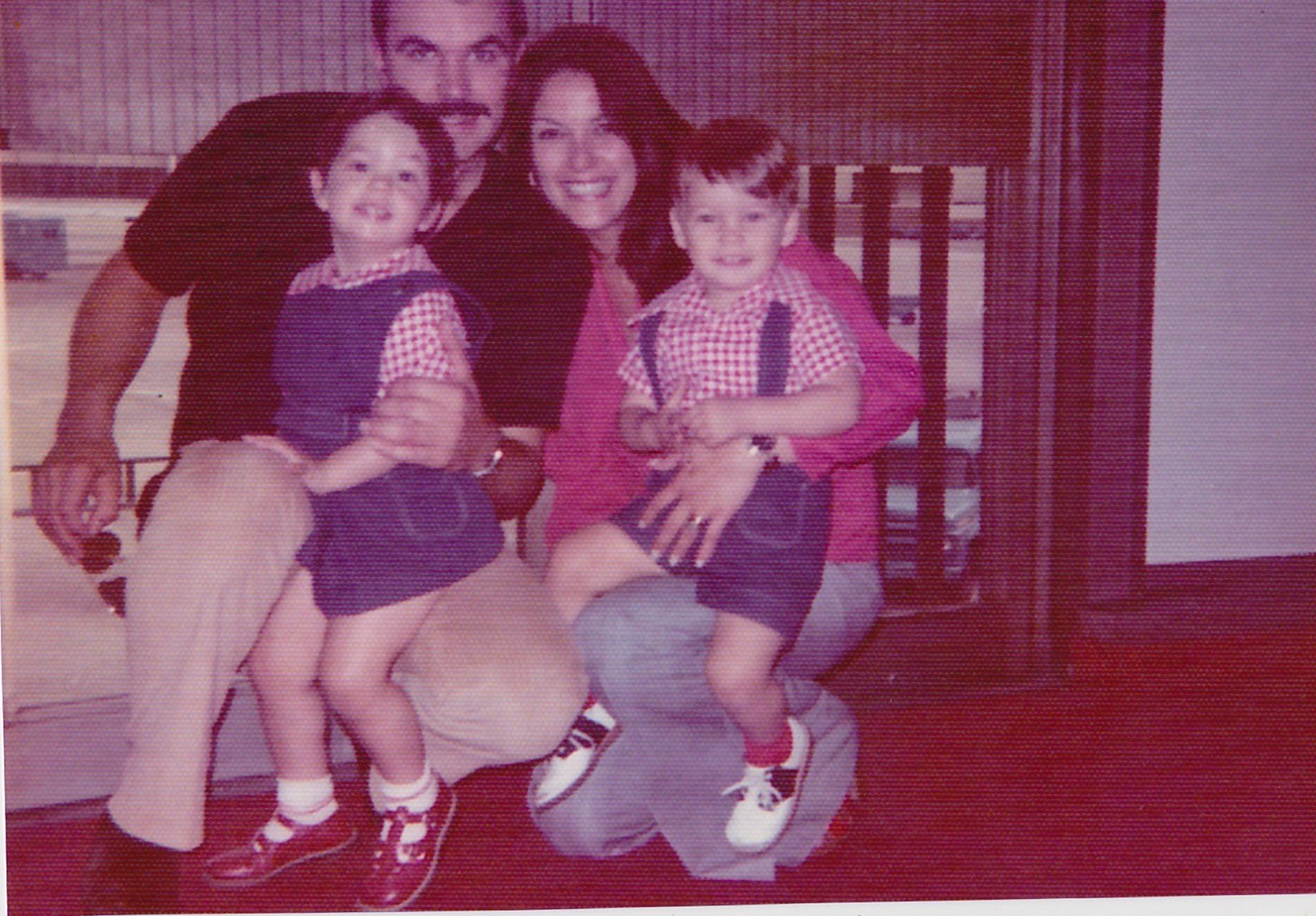 How My Parents Helped Me to Have Great Births

Above, left to right: Me, Dad, Mom, and my twin brother, Jack

It’s my birthday in a few days. Father’s Day, too.

So this time of year I think about my parents and my birth a lot. This year, I’m thinking about them in the midst of writing a book on birth and postpartum, and today I made a connection. In today’s post I acknowledge both my parents for their positive influence on my births.

Like everyone else who has access to any form of media, I was taught the story that birth is grueling, painful, and dangerous. While I believed it on one level, my parents gave me two particular experiences in childhood that helped me to overcome that programming and have great births.

Mom’s gift is two-fold: the facts of her birth with us, and her attitude about it.

First, the facts: Mom gave birth naturally to twins, one of them breech. She hadn’t meant to, necessarily, but the birth happened so fast. It was almost over before she knew it. My mom’s experience gave the lie to the widespread notion that twin births and breech births were dangerous. “If she can do it, so can I,” I reckoned.

Just as important as the facts of her easy birth was the way she spoke about it: with awe and exhilaration. She never mentioned pain. I even asked her, and she seemed to scan her memory banks and come up blank. She shook her head and shrugged: “You came out so fast the doctor almost dropped you!” she said.

Furthermore, she celebrates the details of her labor and birth every year with us.  The day before our birthday she’ll call and say, “Daddy was massaging my back right now,” however many years ago it was. Or, “I was just about to leave for the hospital right now.” If she can she’ll call us each on the minute of our births and sing us “Happy Birthday.”

Her positive feelings about labor and birth went into me much deeper than any fearful programming from TV or literature, and I’m certain contributed to the relative ease of my births. Thank you, Mom.

Dad’s gift was believing in me in a moment when I was frightened and in pain.

I was six years old. I had been playing Tarzan on a vine that hung from a palm tree. Swinging on the vine dislodged a spine-covered palm frond from the tree. It crashed onto my head and rolled on to my arm, leaving me woozy and full of pine needles. When my parents, who were normally untroubled by childhood injuries, saw my wounds, they blanched – even my dad! Now I was worried.

But they were brilliant. The lay me down on Dad’s napping sofa and hovered over me to administer first aid. I fixed my eyes on their faces as Dad carefully removed the needles and Mom swabbed the blood with hydrogen peroxide. I saw and heard them tell each other repeatedly how brave I was. Dad said, “I can’t believe her pain tolerance.”

When he said that, two things happened. First, I flushed with pride, and from then on I believed myself to be a person with a high pain tolerance.

The second thing that happened when he said that is my injuries stopped hurting. I looked down at my arm, where he was removing needles, and I felt pressure but no pain. There was only the thought, “I have a high pain tolerance.”

I learned that I was tough and that things that looked scary or were supposed to be painful didn’t have to be that bad. I’m certain this belief in myself and my pain tolerance contributed to the relative comfort of my births.  Thanks, Dad.

These lessons were instrumental in my births, but of course they’ve influenced me well beyond birth.  Having parents who celebrated me and saw my strengths has had an incalculable effect on my life.  Thank you doesn’t begin to cover it.