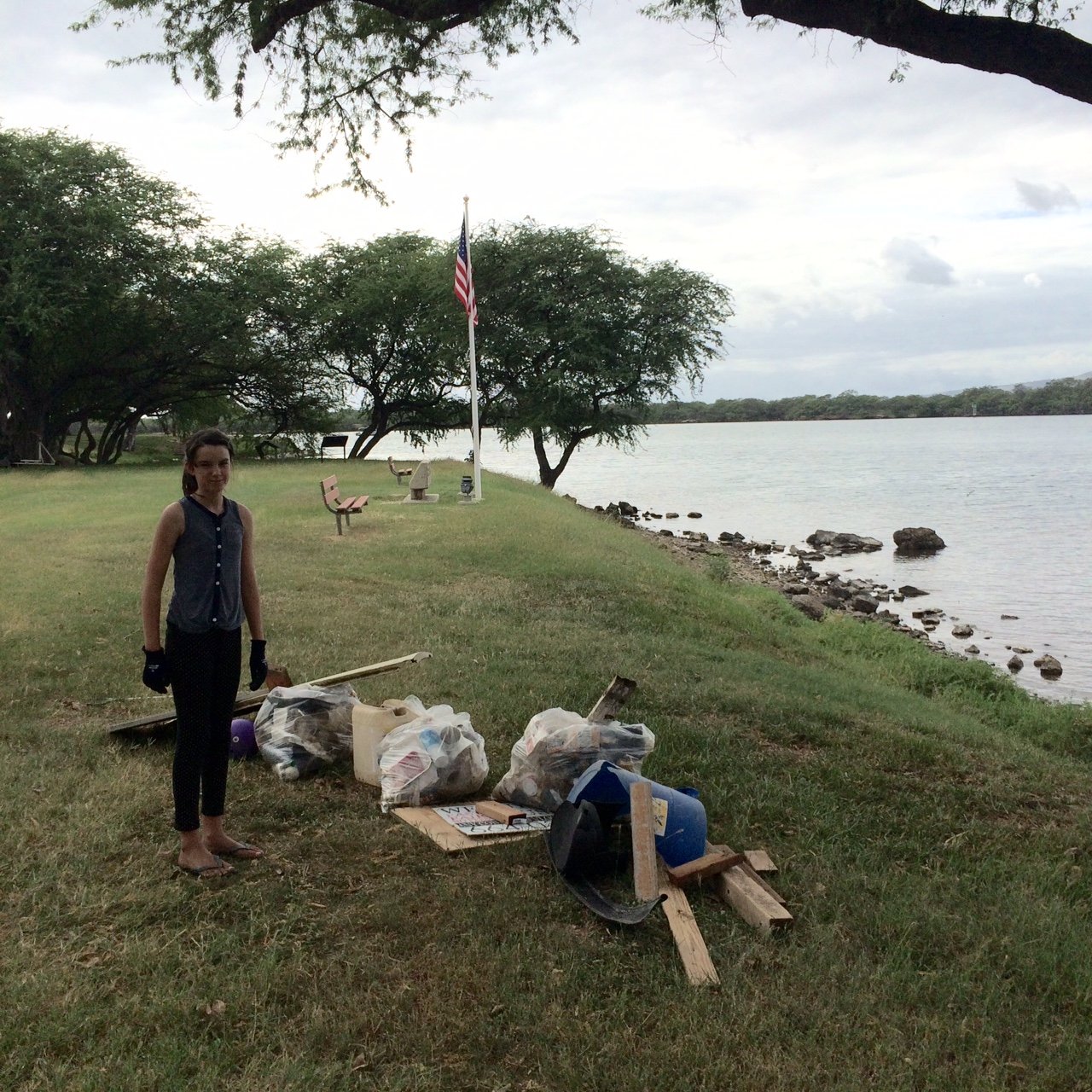 My daughter, my teacher.  Here she is today, nearly 12, next to the pile of trash she collected from the beach.

Motherly love can flourish when you recognize your child as separate from you.

This may sound obvious, but in practice things can get really tangled.

Who gets the dirty look when a baby cries on a plane or when the toddler screams in a restaurant? Who is blamed when teens and young adults go bad? In all these situations, who worries the most about the child?

We are so intimately connected to our children and so influential that we can, unconsciously, believe them to be extensions of ourselves, instead of their own people. When we do that, challenging behavior becomes a judgment of our mothering. A child’s unhappiness becomes a problem the mother must solve.

If we see them as separate people, however, their behavior becomes communication, and we listen with curiosity and openness. Their moods become events we recognize with fellow-feeling, and we become better able to lead them through, or simply sit with them, compassionately.

Last week I wrote about how my first-born, my daughter, Elliot, taught me to give her unconditional acceptance. (To remind you, it took almost four years of daily tantrums until I got the message, and then the tantrums stopped, pretty much the minute I offered it to her).

This is the season of her birthday – she turns 12 at the end of the month – so I am thinking about her a lot these days. Today I share the story of how she taught me that she was not an extension of me, but her own person, with her own ideas. After I learned that lesson, our relationship changed completely.

Before I begin, though, I need to tell you that I didn’t have a name for any of this when I was going through it.  I began to understand what happened when I read How to Talk So Kids Will Listen and Listen So Kids Will Talk, by Adele Faber and Elaine Mazlish, a few years later. I understood even more when I read Bonnie Harris’s When Your Kids Push Your Buttons. I recommend both books highly.

Before Elliot was born, I had longed for a child. It took us three years and the help of a fertility clinic to conceive her. The pregnancy was healthy, though at the end I became enormously swollen and my providers were concerned that she was “too big.” My labor with her was not the triumph of natural birth I had dreamed of, but rather snatched at the last minute from the jaws of a threatened c-section for “second stage labor dystocia.”

I loved her from the start, yet I did not feel the elation I expected after her birth. Then, to my desperate disappointment, she wouldn’t breastfeed. We tried for five weeks, with specialist help, but she never did latch on.

It was a poor start because feeding the newborn dominates a new mother’s consciousness. It set the stage for me to see her as inscrutable and perhaps even finding some fundamental fault in me – the same fault, perhaps, that prevented me from getting pregnant naturally.

When she didn’t nap as the baby book said she ought to, again I felt there must be something wrong with me – Why couldn’t I figure out something so simple? Or with her – Why wasn’t she like the babies in the book?

Fortunately, by three months old she was sleeping through the night, napping regularly during the day and taking her bottles like a champ. Once she became “organized,” as the books called it, that sense I had of being found wanting eased, and I was able to delight in my baby. Finally, I had proof that I was a good mom.

That was all put to the test when we moved from San Diego to Maryland. We had taken a month to cross the country, and by the time we arrived at our new home my previously organized baby had become very disorganized! She didn’t sleep through the night anymore. She didn’t nap predictably anymore. She refused to eat. I was tired and demoralized. Once again, my child had become inscrutable to me. My sense of myself as a good mother was being threatened.

One morning at breakfast we were having our by-now usual battle over eating. I kept trying to shove the food in her mouth, and she moved her head from side to side to avoid the spoon. I was angry! Why was she being so difficult?

In a moment of clarity, I saw myself: a grown woman fighting with an infant – with my own, beloved daughter. I saw how absurd it was. I set down the spoon. I relaxed back into my chair. I laughed! I looked at my baby girl in the high chair in front of me, looking back at me with her nickel eyes, and I said, “Oh, honey, I’m sorry. It’s okay. You don’t have to eat if you don’t want to. I trust you.”

She sat there, looking right into my eyes for several beats. Then she calmly picked up the spoon. And fed herself.

She never took another bite of food from me. She has fed herself – and well – ever since.

In that moment, I learned to see her as her own person: a person who knew her own mind and body and who could be trusted. Once that was clear to me, I stopped seeing everything she did as a reflection of me, but rather an attempt at communication.

As I said, it wasn’t smooth sailing always and forever after that. But that understanding allowed me to become a much more relaxed mother and to enjoy her much more. It paved the way for a pretty blissful postpartum experience with her little brother, who came about a year later. If I could trust Elliot, it stood to reason I could trust Baby Nathan, too. So I followed his cues, rather than trying to shoehorn him into my own preconceived notions, and we had a good and easy time of it.

Eleven years on, that understanding continues to inform my mothering. When I find myself in pain over something my children feel or have done, it is a signal that I am forgetting that they are not me. I take a step back and look at them as their own people, on their own journey. This reminds me of their strength and trustworthiness. I believe in them, and my heart overflows.