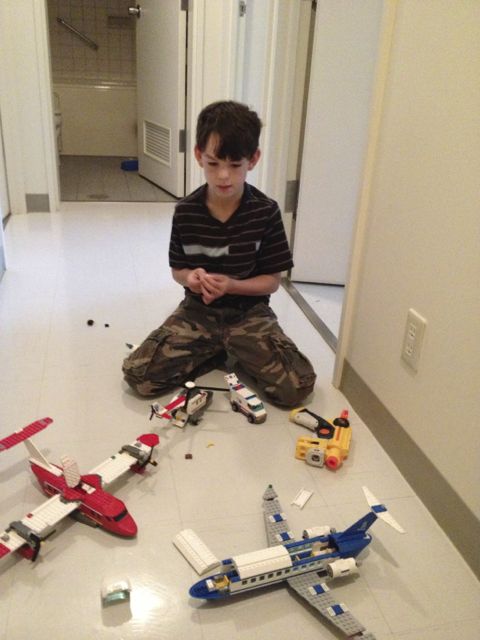 On the Other Side of Resistance: Possibility

See those intricate Lego creations? This boy has no trouble concentrating.

His tears were copious. He was weeping.  Weeping.  Christmas vacation was on its last legs.  School resumed in three days and my eight-year old son was inconsolable.

He has a powerful imagination, and it was hurting him – imagining his return to school – so I asked him what his ideal school would be, if he were in charge.

“There would be no school!” he cried.

Hm.  Not the direction I’d hoped for.  I persisted.  “But that’s cheating,” I said. “In this game you think of how to make it great, not go away.”

“The only great school is no school!  I want to be home schooled!”

I winced.  There it was, the demand I dreaded. Home school.  My best friend and many others of my friends homeschool and I think they’re amazing!  I think it’s ideal if you can do it.  But me?  No, it’s not for me.  I’ve said so countless times to my husband, my friends, my kids, and to strangers who don’t even ask.  I want to do my work, and I need them at school in order to do it.

I walked away from my sobbing child. Maybe he would calm down if he had no audience.

Ten minutes later. . .  No. Still crying.  Inside, I cried, too.  But my cries were more for myself than compassion for his pain.  I do not want to home school!  I need him to go to school!

My mind flashed back to when he was an infant.  He was the sweetest baby.  He slept, he ate, he played and smiled, and then he slept some more.  He never cried!  Well, except when we were in the car.  When he was strapped into his hard plastic car seat and facing away from me in the back seat for indefinite periods of time, he would wail.  And I would let him.  I had places to go!  He needed to get used to it! I couldn’t put my entire life on hold for him, could I?  It wasn’t until my best friend came for a visit and was distressed by his wailing that I realized how much I had hardened my heart to his cries when they were inconvenient.  “Shouldn’t we at least stop the car?” she said.  “What’s the hurry anyway?”

I look at him now, eight years old and curled in the fetal position on my bed – mine, not his own – with fresh eyes.  He is the sweetest boy.  He is playful, imaginative and bright.  He makes us laugh and is good company.  He used to be more easy going, though.  He started to be more emotional and prone to anger around four.  It occurs to me that that’s about the time he started his first all-day school.  He enjoyed nursery school and Kindergarten well enough, but since first grade he has found it hard to concentrate and get his worksheets done on time. Don’t get him started on homework! He has been asking to be home schooled for at least a year now, but I have resisted. I believe I need him to go to school.

Oh. I hear it now: I need him to go to school.  Is it true?  I ask myself the first question of The Work of Byron Katie, the method of questioning painful thoughts.  It is, to me, a miraculous method.  I use it whenever I notice that I’m believing a thought that is causing me pain; in other words, every day.  She and many other spiritual teachers teach that it’s our thoughts about our circumstances that cause us pain, not the circumstances themselves.  Reality is always kinder, she says, than our thoughts about it.

How do I react when I believe the thought (that I need him to be in school and he desperately wants to be home)?  Well, I fight him. I harden my heart. I am the hard plastic car seat that faces his soft little body away from everything he loves (me).  Shouldn’t we at least stop the car? What’s the hurry anyway?

Who would I be without the thought? Open. Curious. Soft. I would stop the car, stop driving to a destination, which I believe is Best and Important, and listen to what he is telling me.

Turn the thought around.  I don’t need him to go to school.  I need him to be home.  Could those turnarounds be as true or truer than my original, painful thoughts?  Well, for starters, they feel good when I say them.  My body feels looser and lighter.  It isn’t until I feel the physical and psychic freedom of this turnaround that I notice how violently I had been resisting!

I need me to go to school.  Maybe having him home would teach me something I need to learn.  I have been consciously resisting this for so many years.  In all those years of resistance and having both my children in school so that I could work unfettered, the business that I was sure I’d build just. . . hasn’t happened.  I have not built it yet.  Could it be that dropping my resistance to having them home and incorporating them into my work life could shift something?  Could leaning into home schooling create not just happier kids but a more robust professional life for myself?

Softened to the point of porousness from The Work, I curl my soft body around his and we fall asleep together.  I wake up lighthearted and unafraid.  I hadn’t realized I was afraid, but the absence of it is noticeable.  It is proof that I’m on to something good.

He doesn’t mention his dread of school again until the night before school resumes.  I haven’t told him of my new openness to home schooling or my decision to work the month of January as if I’m already homeschooling.  I want to prove to myself that I can be more productive in less time.  I say nothing, yet he seems to feel that something is different, because he does not cry.  He is nervous but no longer desperate.

“I don’t want to go back tomorrow,” he says Sunday night.

I say, “Is there some way we can make it better?  Maybe a special breakfast or special lunch? Or we could plan some fun for after school?” I notice I’m curious about what he’ll say, no longer needing a particular answer or speedy closure.

“Will you wake me up early so there’s time to play before school?” he suggests.

“And would you consider maybe possibly letting me have Wednesdays off from school?” he ventures. Wednesdays are short days.

He smiles then is thoughtful.  “Well, maybe just every three weeks,” he says.  “We don’t want to go crazy.”

We both smile and start laughing.  We hug each other and he gives me a dozen kisses.  Will I home school?  Maybe.  I don’t want to go crazy!  Dropping my resistance to it, though, is the first step on a journey toward something better than I previously imagined.  Of that I’m sure.

Do you home school?  If not, have you ever been tempted — or begged?  What did you do? Do you have an experience with finding exciting possibilities after dropping resistance? Please comment below!