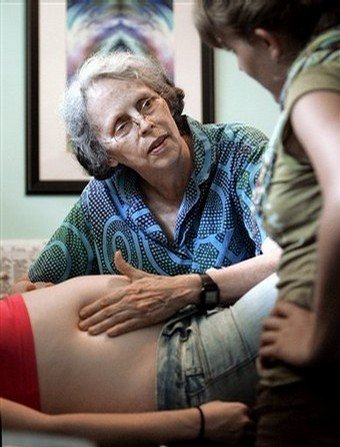 The Farm: Why You Can Trust Nature’s Design for Birth

Ina May on the Farm

Quick:  How many women out of one hundred do you believe could give birth safely at home?  What’s the first number that pops into your head?  Your answer to this question reflects how much you believe in the body’s natural ability to birth.

When I became pregnant, this question of safety became an urgent one for me.  I figured educating myself would improve my chances for a safe birth, so I took a HypnoBirthing class.  It worked.  I gave birth safely, calmly and with a minimum of discomfort.  I knew I was physically no different from other healthy mothers, so I reasoned that HypnoBirthing had made the difference.  I became a HypnoBirthing Certified Educator to help other mothers have safe, satisfying births.

I have been studying birth ever since.  My reading has always sought to answer the first, fundamental question:  how safe is birth, really?  This the biggest source of fear about birth, which I wrote about in a recent blog post (http://www.wisdomchildbirth.com/why-we-dont-talk-about-birth-as-a-womens-issue/).   Can Nature’s design really be trusted?  How often does it need medical back up?

Attempts to answer this question coalesce around the topic of homebirth, because there is no medical intervention in a homebirth; if intervention is needed, the mother is transferred to hospital.  Unfortunately, there is not a clear answer in the scientific research to the question of the safety of homebirth.  The best we can say with confidence is that home birth has not been proven to be any less safe than hospital birth.  Feel better?  I didn’t think so!

Enter the book Spiritual Midwifery, by Ina May Gaskin.  Gaskin is a self-trained midwife who practices on the Farm, the commune in Tennessee she started with her husband, Stephen, in 1970.  (Read more about Ina May in the New York Times magazine’s recent article, http://www.nytimes.com/2012/05/27/magazine/ina-may-gaskin-and-the-battle-for-at-home-births.html?emc=tnt&tntemail1=y).  I read Spiritual Midwifery with passing interest, believing it a quaint relic of an age gone by:  there were black and white photos of long-haired hippies in 70s clothes (or none at all) and they talked about auras and said things like, “It was psychedelic!”  But one day I happened upon Appendix A in the back of the book, “Outcomes of 2,028 Pregnancies: 1970 – 2000.”  I snapped to attention.  Their groovy birth culture and midwifery model of care was nice, but did it actually make birth safer?

Ninety-five percent of women gave birth safely at home! Only one percent of births were c-sections!  Only five percent of moms needed to be transferred, and only 1 percent was considered an “emergency.”  (This begs the question, should 92% of women, the national average, really be giving birth in hospital when only 1% are actually going to experience an emergency?)

These numbers are striking, but what makes them utterly compelling are the low death rates.  They lost no mothers – it should be said that in the US maternal death is so rare that it’s counted in the 100,000’s – so that is good but not unexpected in such a small population.   However, neonatal mortality is much more common, with numbers expressed in the 1000’s.  Neonatal deaths on the Farm were well below the national average of 8 per 1000 (as of 2005).  This tells me that the standard of care was a very high one: they did not sacrifice mothers and babies in the service of a principle.

Furthermore, births that are increasingly considered “automatic” c-sections were accomplished on the Farm.  3.5 percent of births were of breech presenting babies, 90% of whom were born at home.  All 17 sets of twins were born vaginally.  And to those women who have been pressured into an artificial induction, would you be surprised to learn that only 5% of mothers on the Farm were induced – and with castor oil instead of with drugs?

These numbers give me great confidence in the body’s ability to birth naturally. The only fault I can find with them is that there are so few!  That is the only rationale I can imagine for their relative obscurity in the conversation over the safety of homebirth.  The numbers may be few, but they are consistent over forty years.  At the very least this is proof of the viability of the midwifery model of care for low-risk mothers.

If you are now persuaded that birth is mostly quite safe but still feel a great deal of fear, I think I know why:  pain!  It’s the subject of my next blog post.

Are you persuaded?  Persuaded enough to consider birth at home?  Have you heard of Ina May and The Farm before?