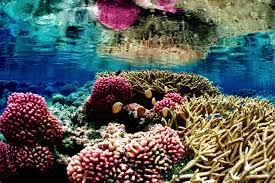 The Reef: Life Thrives in Diversity

I felt drawn to a walk outside yesterday. If you’ve never been here, you should know that all the clichés about Hawaii are true. It is as lush and inviting as the postcards suggest. But yesterday was especially beautiful because of a cool ocean breeze after a week of rain and mugginess.

I chose the bike path at Hickam Air Base. It is prettily situated between lovely, large homes with sweeping back lawns and the Pearl Harbor channel. The path is curvy and paved and lined with palm, acacia and fig trees, as well as the large-leafed and multi-colored tropical bushes and flowers whose names I don’t know yet. There is so much for all the senses to take in, delights for the eyes, ears, nose, skin. It’s easy there to pay attention to life, rather than to stay tuned in to my own loop of thoughts.

This walk was meant to be not only a respite for my soul but a bit of exercise, too. So when I reached the turnaround in the path, I was surprised to find myself not carrying on with my fast-paced walking but rather slowing down and making my way to the sea wall that lined the channel there. I sat down, dangling my legs over the edge, and looked down. The water line was about four feet below my shoes.

Just under the surface was a coral bed about twenty feet wide, and beyond it, the turquoise waters of the channel. The gentle tide continually flowed over the coral, bringing in small- and medium-sized fishes and occasionally shoals of small fish and even schooling fish. Tucked into the coral were spiny sea urchins and spotted brown sea slugs. The rippling water over the coral and its inhabitants was mesmerizing. Where the coral dropped off into the channel, my eye caught a yellow splodge that flitted from spot to spot. Was it a trick of light playing on the coral? I followed the fleeting yellow and finally discerned fins, a tail and an eye. It was a tropical fish the size of a dinner plate!

Such beauty and diversity in this unassuming spot! I had been drawn to the path because of its prettiness: green lawns on one side, blue channel on the other, enough flora and fauna to be interesting. But as I gazed on the coral bed, I realized that prettiness is a poor, man-made substitute for beauty, which is God-made (I do say God, but I’m not fussy about what you call it – Nature, Source, Spirit, the Universe. I do believe it’s all One and we’re all right).

“God-made.” Hey. That includes me! Before this walk, I had been feeling scared about launching the new project I’ve been working on. It’s my very own birth and new motherhood preparation course, Becoming A Mother. What if someone says that it’s been done before (and by people with intimidating resumes and dazzling eloquence)? What if no one likes it? Who do I think I am?

Looking at the biodiversity of the reef, I was reminded of a comment my best friend made recently: nature thrives in diversity. Not just nature, I realized, but all of life thrives when there is diversity. So there already exist (popular, well-known) birth preparation programs. What if Nature had said, “But I already made a fish. One is enough.” That’s laughable! There are fish – not just one, tens of thousands – that evolved for the coral reef, and they help it to thrive. So my program will be the perfect fit for my unique ecosystem. What if no one likes it? What if someone does?

I’m going for it. If you’ve liked what you’ve seen here, please watch for more information about the launch of Becoming A Mother. If you’ve already had your children, tell the other fish in your shoal that soon there’ll be a new place to feed and play!

God-made includes you, too. What is your deep gladness? Where does it meet the world’s hunger? Where are you holding yourself back because you’re afraid the world doesn’t need another [fill-in-the-blank]. I’d love to know and so would the world!