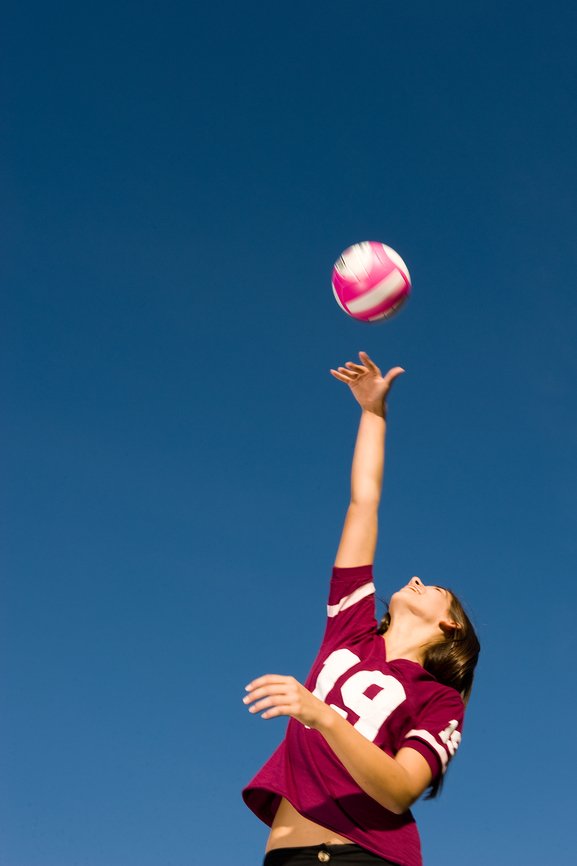 My daughter’s volleyball season is ending. She’s in 7th grade, and most of the girls on her team are complete novices.

Their first game it really showed. It was as if they were made of wood. The ball would be served to them, and they’d watch it sail over the net and land on the gym floor between them. When they managed to bump, the ball would go wildly off, out of bounds. Their only hope for scoring a point was if the other team made an error, or if they got lucky and one of their serves went over the net.

The only thing they could do reliably was to cheer each other between plays, coming together to join hands and shout in unison, “Fight back!”

But, hey, that’s something, isn’t it?

My husband, who loves volleyball, was the parent who took her to games and cheered her. But their second-to-last game was two nights ago, and the whole family went.

What I saw astonished me. The girls were fluid. A team. They went for every ball. They bumped with control. They set up to spike. . . okay, they still don’t know how to spike, but they get the process. They communicated. No longer content to watch the ball fall to the floor, they dived between the ball and the floor to keep the it in play. They went for it.

And the bonus? They even won.

I say it’s a bonus, but to those girls, the defining feature of their season is that they lost every game until this recent win. They think they are a losing team.

As one outside their process, though, I see clearly that they are a not a losing team. They are a growing team. They may have lost more sets than they won this season, but they are winning the longer game.

It’s wonderful for them, and it’s a great metaphor for me. Maybe for you, too.

I am so hard on myself. I focus on the tasks I don’t manage to accomplish, the sales I don’t manage to make, the ideas I don’t follow through on. I think I’m much slower than I should be, and much less productive than I have a right to be.

Like my daughter’s volleyball team, I don’t feel very successful. If I take a wider view, however, I can see the growth:

When I hold in my mind the amazing women and men I’ve coached, all I feel is privilege.

None of this even touches the pride I feel in the relationships I enjoy with my family and friends. Maintaining those relationships takes time, thought, heart and work. Though the love in my life is a gift – I could never do enough to earn it – nurturing it is true accomplishment.

As I see her growth this volleyball season, my thoughtful daughter sees mine, too. This summer she attended one of my talks. The audience was very small – three guests, the organizer and my daughter! She had seen me work so hard to prepare the talk, and I was embarrassed that she should see how small a crowd I was able to attract.

Then again, three people had chosen to spend their evening with me.  That’s something, isn’t it?

I gave them my all.

In the car on the way home, my 12 year old daughter said, “Thank you, Mom. You’re showing me it can be done: that a woman can be an amazing mom and follow her dream, too.”

Talk about a win. She gave me the wider view I had totally lost sight of: that I was growing.  Simply by continuing to play and reach and stretch, I was winning the long game.

Are you hard on yourself, too? Do you feel like you’re having a losing season? I invite you to take a wider perspective and notice how different the view is.